Britomartis was a goddess of hunters, mountains and fishermen of the Minoan civilization that evolved on the island of Crete from about 2700 to 1450 BC.  There are many conflicting parts of the Britomartis story in Greek mythology. This may possibly be due to it having originated with an earlier civilisation before becoming adopted and adapted later by the Greeks as their civilisation grew in influence and power.  This process of adaptation can be found in other Greek legends. For example the birth of Zeus in Crete, Europa and the bull, Apollo brought Cretans to Delphi to be priests of his cult and there are many other instances. 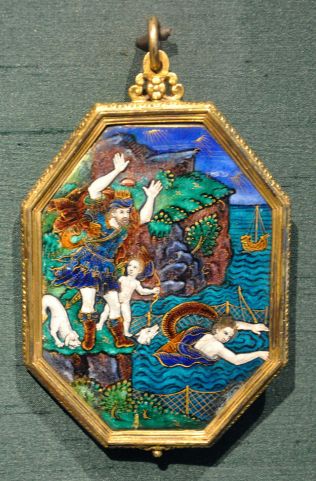 The story of Britomartis – Public Domain

Minos falls in love with Britomartis

Britomartis was the daughter of Zeus and Carme and was born at Caeo on Crete as one of the Cretan nymphs. She became a huntress and hunted the wild animals in the forests of Crete and was a companion of Artemis becoming strongly associated her, with both sharing the desire to keep their virginity.

But when Minos, the king of Crete, set eyes on Britomartis he immediately fell in love with her. Minos was the son of Zeus and Europa and so sharing the same father made him her half-brother. Such a union would have been unacceptable to her, though not to him.

Britomartis was not enamoured with Minos who tried to force himself on her. She escaped and ran from him. Although she was a fast, strong runner she could not lose him, and the chase was said to have lasted for nine months before he eventually managed to trap her on a cliff edge overlooking the sea.

Although trapped, Britomartis threw herself off the cliff into the sea rather than submit her virginity to Minos. Fortunately she was rescued by fishermen who caught her in their net and for that reason she received the name Dictynna, which means “lady of the nets.”

Her friend Artemis was greatly impressed by her determination to keep her chastity intact and made her the goddess of hunters, mountains, shores,fishermen, nets and ports.  Some also regard her as a moon goddess with her being chased by Minos and leaping into the sea as representative of the cycle of the moon and its seeming disappearance into the sea, as seen from a sea edge location.

There is a strong school of thought that Britomartis was actually the name of Minoan goddess, who later became known under different names as her cult spread. On Aegina she was called Aphaea, and Diktynna in parts of Crete and it is thought that she was later absorbed into the cult of Artemis.