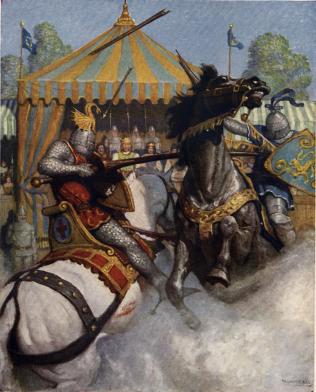 The Coat of Arms of the Duchy of Brittany

The former Duchy of Brittany was a small feudal state in medieval times before it became part of France.  Like most other such states it had its own Coat of Arms.   Curiously, the Duchy’s featured the white winter coat of the stoat which was often known as  ermine. There are at least two legends as to how this came about.  The first concerns Anne de Bretagne the last independent ruler of the duchy and the other King Arthur, the King of Britain. This work deals with the Arthurian version.

This legend goes back to the time King Arthur ruled Britain.  As well as being a mighty warrior and leader of men he was also a good and wise king who was devoted to God and the Blessed Virgin Mary.  Hugh O’Reilly tells the The Legend of the Ermine of Our Lady which explains how this came to be.

The Loss of Gaul

The story takes place during the time when the Emperor of Rome was Leo I and Gaul was ruled by Flolo, a Tribune of Rome.  It tells how Flolo was an unjust and cruel ruler who persecuted Christians and frequently blasphemed against the Virgin Mary ordering the desecration and destruction of her statues, shrines and relics.

During this period Arthur had lost control of Gaul and was back in Britain at his court.  It was said to be towards the end of summer when a knight stood up in his court and called Arthur a coward because he had lost Gaul to his enemies.  He told Arthur that he would now die without being King of the fair and that beautiful land that the Pope himself had given him.

Angry and embarrassed Arthur swore before God and the Virgin Mary that he would retake Gaul and be its King once again.  He vowed that within twelve months he would challenge Flolo man to man. Arthur set about planning and preparing his army for the invasion of Gaul.  By the  time Spring came Arthur had assembled a mighty invasion force and moved it across the sea into Gaul.

In Spring-time the land of Gaul was a marvelous place with oceans of sunshine and lush greenery and it was indeed a most beautiful land.  Arthur was expecting fierce resistance in its defense but no army appeared to confront him.  Bemused, Arthur sent five hundred of his warriors and two thousand archers to seek out the defending army but all they could report was that everywhere they went people fled from them.  Now unlike Flolo, Arthur was not a cruel man and he began to regret that his arrival with such a huge and warlike host of armed men had frightened the local people. They were simple peasants who worked the land for their living and they themselves were victims of the cruelty of Flolo and he felt sorry for them.  Just as he was pondering what he should do he heard the sound of trumpets and a party of messengers rode into his camp.

They were the heralds of Flolo who he had sent to lay down a challenge.  The herald announced that his master proposed that to save needless bloodshed,  instead of the two armies meeting in open battle Arthur should appoint a champion who would fight him man to man to the death.  The winner would rule Gaul.

Flolo was a giant of a man with incredible strength and endurance and was completely fearless in battle.  As a sleight to Arthur he had challenged him to pick his bravest, strongest and best warrior to fight for him, rather than face him himself.  The herald was carrying Floro’s gauntlet and threw it contemptuously at Arthur’s feet.

Arthur’s knights clamoured to be his champion but Arthur silenced them.  He told them that he would fight Flolo and it was he alone who could be King of Gaul. Arthur told the herald to go back to Flolo and tell him that he himself would fight him to the death.  There would be no quarter asked and none would be given and that God alone would grant the most righteous victory.  So with the terms agreed the place of the combat was to be the Island of Notre Dame of Paris.

In the morning Arthur knelt in prayer to God and the Holy Virgin Mary that he may acquit himself with honour and courage and for protection.  Flolo appealed to the god Bacchus for strength and courage and the death of Arthur. Both men then mounted their warhorses and faced each other waiting for the signal from the herald.  The herald stood in the middle of the field waiting for the two to be ready and then blew on a trumpet to let the fight begin.

Fight to the death

Flolo spurred his horse forward and Arthur did the same.  The points of both men’s lances crashed against their shields as they met head on knocking both from their horses.  With lance and shield splintered to shards  both men scrambled to their feet and began raining sword blows at each other.  Both managed to deflect the deadly blows until the height and strength of Flolo gained a brief advantage and blow to Arthur’s head split his iron helmet and brought him to his knees knocking the senses from him.

Appearance of the Holy Mother

Arthur’s followers groaned thinking their King must surely die.  Flolo raised his sword for the final blow but that blow never came.  To the astonishment of all the Holy Mother Mary appeared with a cloak of ermine around her shoulders which she quickly threw over Arthur’s shield.  So pure and white was the ermine cloak that Flolo was temporarily blinded and stunned with terror.  Arthur, although wounded seized his chance and with his last strength took off the head of his enemy with his sword, Excalibur. 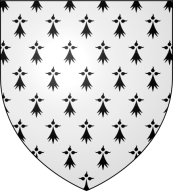 Coat of Arms of the former Duchy of Brittany – Public Domain

Not until the fight was over did Arthur learn from his knights of the apparition of the Virgin Mary.  To give thanks and to honor her he ordered that a Church be built on the island. Today the Church of Notre Dame of Paris is said to stand on that same spot.  Arthur then ordered that his nephew, Hoel, the sixth Duke of Brittany should incorporate the cloak of ermine on his Coat of Arms also.  According to legend from that day on ermine was always borne on the  Coat of Arms of the Duchy of Brittany.