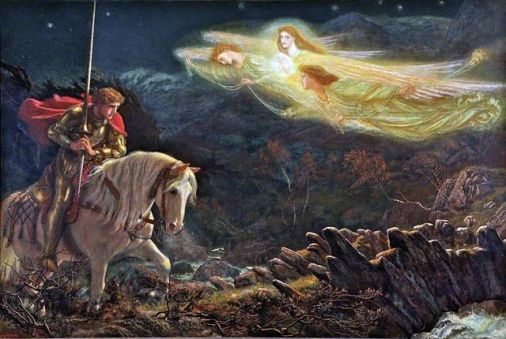 Sir Galahad first appeared in medieval Arthurian romance in the Lancelot-Grail cycle of works and then later in Le Morte d’Arthur by Sir Thomas Malory.  He was the illegitimate son of Sir Lancelot and Elaine of Corbenic and became one of King Arthur’s Knights of the Round Table.  When he came of age he was considered the best knight in the world and the perfect knight and was renowned for his gallantry and purity becoming one of only three Knights of the Round Table to achieve the Holy Grail.  The other two were Sir Bors and Sir Percival.  Pieced together here is a brief look at his early life and how through his immaculate behavior he rose to such an exalted status  achieving the Holy Grail and a spiritual dimension which remained frustratingly out of reach of King Arthur, Sir Lancelot and most of the the other Knights of the Round Table and concludes by comparing his achievements with those of King Arthur and Sir Lancelot.

King Pelles the lord of Corbenic the Grail Castle, in the land of Listeneise  and was Galahad’s maternal grandfather.  He was also one of the line of the guardians of the Holy Grail. In some Arthurian romances  Joseph of Arimathea brought the Grail to Britain and gave it to Bron, his brother-in-law, to keep safe and Pelles was descended from Bron. In some versions of Arthurian romance Pelles is also known as the Fisher King or Maimed King.

Pelles had been wounded in the legs or groin resulting in a loss of fertility and his impotence was reflected in the well-being his of kingdom making it infertile and a Wasteland. This is why he was sometimes called the Maimed King.  The only activity he appeared able to do was go fishing.  His servants had to carry him to to the water’s edge and there he would spend his time fishing which is why  he is sometimes called the Fisher King.   Galahad was important to King Pelles as he was the only one who could heal his wound.

King Pelles had a daughter named Elaine and he had been forewarned by magical means that Lancelot would become the father of his daughter’s child.  This child would grow to become the world’s best and most perfect knight and be chosen by God to achieve the Holy Grail.  He was the chosen one who would be the only one pure enough to be able to heal his wound.  There was a problem though. Lancelot was dedicated solely to Guinevere, his true love and would never knowingly sleep with another woman.   Nevertheless Pelles was desperate for the liaison to take place and decided to seek magical help from Dame Brusen.  She was one of Elaine’s servants who was skilled in the art of sorcery to help his cause.  She gives Pelles a magic ring for Elaine to wear which gives her the likeness of Guinevere.

Elaine wears the magic ring and transforms into the a double of Guinevere.  Lancelot is fooled by the masquerade and they sleep together.  When he discovers the deception he is angry and ashamed and threatens to kill her.  She tells hims she is with his child and he relents but leaves Corbenic.

Elaine in due course gives birth to his son who she names Galahad.  This is the name Lancelot was baptized with when he was born.   It was the Lady of the Lake who fostered and raised Lancelot in her magical realm and it was she who named him Lancelot du Lac, or Lancelot of the Lake.

The madness of Lancelot

Soon afterwards Elaine goes to a feast at Arthur’s court.  Although Lancelot is also there he refuses to acknowledge her, making her sorrowful and lovelorn.   She calls her servant Dame Brusen to her and tells her how she is feeling and asks for her help.  Dame Brusen tells Elaine that she will fix it so Lancelot lies with her that night.  Pretending to Lancelot that Guinevere has summoned him she leads him to her chamber, but it is Elaine waiting there for him in bed in the dark and again he sleeps with her.

While he is with Elaine, Guinevere summons him and is furious to discover he is not in his bed chamber and even more so when she discovers him lying with Elaine in hers.  She tells him that she never wants to see or talk to him again and will have nothing more to do with him.  Lancelot is so upset and disturbed at what has happened and with Guinevere’s admonishments that madness takes him and he leaps out of the window running off into the wilderness.

Lost in madness and consumed by grief and sorrow he wanders alone through the wild places before he eventually reaches Corbenic where Elaine finds him insane her garden. She takes him to a chamber in Corbenic Castle where he is allowed to view the Holy Grail, but only through a veil.  Nevertheless this veiled sight of the holy relic is enough to cure him of his insanity.  Although he sees it through the veil, having committed adultery he is not pure enough so he can never be the perfect knight that achieves the Grail.

When his son is born he finally forgives Elaine but will not marry her and instead returns to the court of King Arthur.  The child is named Galahad, after his father’s former name and given to his great aunt to bring up in a nunnery.  Merlin foretells that Galahad will be even more valiant than his father and will achieve the Holy Grail.

Galahad’s quest for the Holy Grail

It was not until Galahad became a young man that he was reunited with Sir Lancelot, his father, who makes him a knight.   Lancelot then takes Galahad to Camelot at Pentecost where he joins the court.  A veteran knight who accompanied him leads him to the Round Table and unveils an empty chair which is called the Siege Perilous or the Perilous Seat.  At the advice of Merlin this seat was kept vacant for the knight who was to achieve the Quest for the Holy Grail.

This was his first test or worthiness as this chair in the past had proved deadly for any who had previously sat there who had hoped to find the Grail.  Galahad sits in the seat and survives.  King Arthur sees this and is impressed seeing that there is something special about him and leads him down to a river  where there is a floating stone with a sword embedded in it which bears an inscription  which says,

“Never shall man take me hence but only he by whose side I ought to hang; and he shall be the best knight of the world.”

Galahad tries and takes the sword from the stone and Arthur immediately declares that he is the greatest knight ever.  Arthur invites Galahad to become a member of the Round Table which he accepts.  Not long after the mystical presence of the Holy Grail is briefly experienced by those at King Arthur’s Court and the quest to find the grail is immediately begun. All the Knights of the Round Table embark on the quest leaving Camelot virtually empty.  Arthur is sad because he knows many will die or not return and fears it is the beginning of the end of his kingdom. 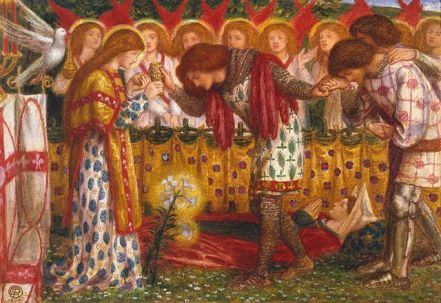 Galahad mainly traveled alone and became involved in many adventures. In one he saves Sir Percival when he was attacked by twenty knights and rescued many maidens in distress.  Eventually he meets up again with Sir Percival who is accompanied by Sir Bors and together they find the sister of Sir Percival who takes them to a ship that will take them over the sea to a distant shore.  Sadly when they reach the shore Percival’s sister has to die that another may live.  To ensure she gets a fit and proper burial Sir Bors takes her body back to her homeland.

Sir Galahad and Sir Percival continue the quest and after many adventures arrive at the court of King Pelles and his son Eliazar.  Pelles and Eliazar are holy men and take Sir Galahad into a room to show him the Holy Grail and they request that he take it to a holy city called Sarras. After being shown the Grail, Sir Galahad asks that he may he may choose the time of his own death which is granted.

While he is on the journey back to Arthur’s court Joseph of Arimathea comes to him and he experiences such feeling of ecstasy that he asks to die there and then.  He says his goodbyes to Sir Percival and Sir Bors and angels appear and he is carried off to heaven as his two friends watch.  Although there is nothing to say that the Holy Grail will not once again be seen on earth it was said that since the ascension to heaven of Galahad there has not been another knight with the necessary qualities of achieving the Holy Grail.

Galahad’s achievement of the Holy Grail

Sir Galahad and the quest for the Holy Grail is one of the later stories that appeared as Arthurian romances grew in popularity.   The thought is that King Arthur and the Knights of the Round Table were not pure enough to achieve such an important religious task. Galahad was introduced into the fold as one of the few who had the purity and personal qualities to qualify him as worthy enough to achieve the Holy Grail.  Just as when Arthur drew the sword from the stone and became the chosen one, Galahad did the same and also became the chosen one. He chose the kingdom of God whereas Arthur built a kingdom on earth.  In taking up the quest for the Holy Grail the priority is to the spiritual rather than the earthly life and Galahad fulfills the spiritual dimension of Arthurian romance and becomes the example for his contemporaries and those coming after him to aspire to.