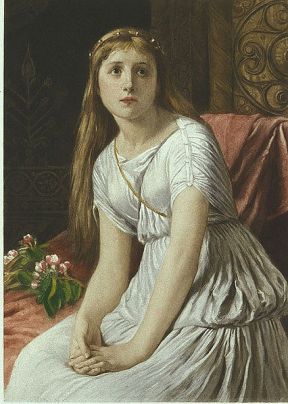 According to Geoffrey of Monmouth, the legendary Queen Cordelia was the youngest daughter of King Leir, of the Britons.  She was unfairly rejected by her father for telling him a truth he should have known.  Instead, he bestowed his favor upon her two sisters who falsely proclaimed their love for him for personal gain.  It’s a story of how love, loyalty and forgiveness triumph over lies, deceit and greed and how a woman took up arms to fight in support of the father she loved and became one of the legendary warrior women of the Britons.

The daughters of Leir

Geoffrey tells us that King Leir had three daughters, Goneril, Regan and the youngest was Cordelia who was his favorite.  As he approached old age he decided he would marry off his daughters and divide his kingdom up between them.  Calling his advisors to him he asked for their advice and they told him to give his kingdom to those who loved him the most.  Leir called his daughters to him and asked how much they loved him.  Goneril and Regan fawned before him and flattered him greatly exaggerating their love for him.

When Cordelia, his youngest and favorite daughter came before him she refused to do the same as her sisters, insisting that he should not need such false proof of her great love for him which she showed every day.  However, Leir’s advisors counseled him to divide his kingdom between Goneril and Regan and give Cordelia nothing as she would not answer him and furthermore refuse to find her a husband.  Leir listened to them and did what they suggested and married Goneril and Regan to the Dukes of Cornwall and Albany giving both a huge wedding dowry.  Goneril married Duke Maglanus of Albany and Regan married the Duke of Cornwall.

Cordelia got nothing and when Aganippus who was the King of the Franks courted her and asked for her hand in marriage Leir refused to pay a wedding dowry.  Aganippus told Leir his love for Cordelia was not dependent on a dowry or anything else he could give as he loved her anyway.  All he wanted was his permission, which was granted.  So Cordelia left her father and married Aganippus and moved to his court in France and they lived there happily.

When Goneril and Regan married they received half of Leir’s kingdom and his wealth between them. They would get the other half on his death but their husbands usurped the throne taking all for themselves.  Marglanus gave Leir a retinue of sixty knights but his daughter, Goneril, halved this after two years.  Leir went to Regan thinking she would support him better but she cut his retinue further to five men.   Disappointed, Leir went back to Goneril to plead for more but she reduced his retinue to a single man to protect him.

With his own daughters abusing and humiliating him in this way Leir fears for his life and goes to France to seek out Cordelia.   Arriving outside of her court and not knowing what kind of reception to expect after his own treatment of her he sends her a message of his arrival asking to see her.  Cordelia, rather than being vengeful at his treatment of her in the past welcomes him and has him bathed and dressed in Royal fashion.   She gives him a large retinue of men to support him and he is received with honor by her husband, Aganippus, the King of France.  Aganippus, makes him a regent of France and promises along with other French nobles to restore his throne to him.

King Aganippus raises an army and along with Cordelia and Leir lead it into battle against the usurpers of Leir’s realm, Regan and Goneril and their husbands.  They successfully defeat them and win back Leir’s realm.   Although Leir had previously left half his kingdom to Regan and Goneril with them getting the other half when he died this was revoked.

Leir ruled his kingdom for three more years before dying and when her husband died Cordelia returned to Britain.  She was crowned Queen and succeeded him.  She buried Leir in a shrine underneath the River Soar dedicated to Janus and held a feast every year in his honor.

Cordelia was to rule as queen for five years in peace but her two sister’s sons Marganus and Cunedagius came of age and inherited their father’s dukedoms.  They resented Cordelia because she had defeated their fathers and because she was a woman.  They claimed that if anyone should rule it should be them and they took to war to defeat her. Although a woman, Cordelia was a warrior and fought many battles.  She led her own army against them fighting herself on many occasions.

Eventually, her nephews defeated, captured and imprisoned her where she died.  She was succeeded by her nephews who split the realm into two.  Cunedagius ruled the country southwest of the River Humber and Marganus ruled the country to the northeast of the River Humber.  Eventually, they fought against each not being satisfied with what they got and Cunedagius defeated and killed Marganus.

Although the works of Geoffrey of Monmouth are not regarded as reliable historical evidence today they were highly thought of in his time and into the 16th century before it became discredited.  Whatever the historical facts may be it is the human characteristics demonstrated by Cordelia of love, loyalty and forgiveness and her willingness to go to war for her father despite his foolishness, set against the failings of Goneril and Regan that resonate through the ages.

The legend of King Leir

The legend of King Leir and his daughters has been a popular theme throughout the ages and was most famously used by William Shakespeare in his play King Lear. The story of the aging king and his daughters has also inspired many other works and has been used in plays, literature, films, operas and art by many different writers and artists and holds an important part in modern British culture.

In the History of the Kings of Britain, by Geoffrey of Monmouth, Leir became king after his father, Bladud was killed in an attempt to fly using artificial wings.   Leir is supposed to have ruled for sixty years, one of the longest serving British monarchs and according to Geoffrey was the founder of the English city of Leicester.  He was said to be the last male heir from the dynastic line of the legendary Brutus of Troy.  According to Geoffrey, Brutus was the first king of the Britons in about the 8th century BCE.  A brief summary of the legend is provided followed by what truth there maybe in the legend and conclude by discussing the redeeming factors and impact of the story.

The daughters of Leir

Leir was the father of three daughters; Regan, Goneril and Cordelia.  As he drew close to death he decided to divide his kingdom between them.  His two eldest daughters Goneril and Regan, in a calculated bid to gain more from their father flattered and exaggerated their love for him. His youngest daughter, Cordelia, was the king’s favorite and feeling that she should not need to prove her love because she demonstrated it daily, refused to use false flattery to deceive him.

On the advice of his counselors he decide his two eldest daughters should marry the dukes of Albany and Cornwall  and his kingdom should be split between them when he died.  His counselors had said that because she had refused to show her love when asked, Cordelia should receive no land to rule or marriage dowry.  Despite this Aganippus, a King of the Franks married Cordelia even though Leir refused to pay a dowry, and she went to live in Gaul.

Leir also gave Goneril and Regan half his kingdom, while he lived and the rest would be inherited by them on his death.  However encouraged by their wives, his son-in-laws usurped him and took the entire kingdom for themselves while he lived. They did not kill him though and the Duke Maglaurus of Albany gave Leir a retinue of sixty knights but Goneril reduced this.  Feeling sleighed Leir went to Regan, who had married the Duke of Cornwall and she reduced it further to a mere five knights.  Leir then went back to plead with Goneril for a greater retinue but what he had was reduced from five to one to serve his needs.

This left Leir humiliated and in fear of his daughters and their husbands and he went to Cordelia who was now living in Gaul with were husband.  Arriving outside her court at Kartia he sent her a message asking to see her.  Cordelia bore him no malice despite his mistreatment of her had him bathed and gave him fine clothing befitting his status.  She then assigned him an appropriate number of retainers to befit his status. She made sure he was properly received by her husband, King Aganippus as was made regent of the Franks.

Cordelia persuade her husband and the Frankish nobles to back an invasion to restore Leir’s kingdom to him.   Their backing was agreed and an army was raised with Leir, Cordelia and her husband leading it.  They successfully defeated the usurper dukes of Cornwall and Albany, his son-in-laws, and restored Leir to the throne.  He ruled for three years before dying and was succeeded by Cordelia.  She buried her father with great honour in a shrine said to be below the River Soar dedicated to the god Janus and a feast was held annually in his remembrance.

Truth in the legend

From the 17th century historians did not take Geoffrey as a bona fide historian some even accused him of making it up himself. Many scholars think he may have drawn upon old Celtic and other pagan gods and legends for his stories as there is little if any real evidence to support his version of history.

There was a pagan god called Leir who is mentioned in a number of ancient texts such as the Triads of the Isle of Britain or Ynys Prydein, a set of manuscripts of medieval origin preserving parts of history, mythology and folklore of Wales.  In this Leir is a water god who has three children and one defeats the other two in a battle to retake his land. Some scholars think the names Lir and Leir are variations of a Celtic deity, with Leir evolving into a fabled king of Britain that was associated with the area we call Leicester today.

Maybe it’s the righting of a wrong done to someone who himself was shown to be devoid of good judgment and gratitude that makes the story popular.  His treatment of Cordelia certainly wins him few friends. Yet even though we may feel that he gets his just desserts by the way his daughters and son-in-laws treat him there is still a degree of sympathy for his foolishness.  It is his loyal and loving daughter Cordelia who is the redeemer of a sorry tale by taking up his cause and restoring him to his former glory despite the wrong he did to her.  Her act of forgiveness and Leir’s treatment of her because she refused to flatter and exaggerate her love shows that action speaks louder than words, especially false words. While the historical accuracy of  Geoffrey of Monmouth’s work may be open to question the impact it has had on British culture is still considerable as shown in the example of King Leir.