Presented below is a retelling  of a Hungarian folktale called Cinder Jack from The Folk-Tales of the Magyars by Erdélyi, Kriza, Pap, Jones, and Kropf.

The Tale of Cinder Jack

There was once a farmer who had three sons.  One morning he noticed a considerable amount of damage had been done to the vines in his vineyard so he asked his eldest son to guard it.  The eldest cheerfully complied and took a cake with him to eat for his lunch. At lunchtime as he was eating the cake a frog appeared and asked him for a piece.

“Never!” cried the boy, “Go away!” he shouted and threw a stone at the creature.  The frog hopped off saying no more and in the hot afternoon sun the boy fell asleep.  When he woke up he discovered someone had been in the vineyard destroying many grape vines.

Of course his father was not very happy and the next day sent his second eldest son to guard the vineyard.  Exactly the same thing happened with him, the frog came and asked him to shade his food. He gave it nothing and chased it away and fell asleep and when he woke up found the vineyard had been vandalized.

His father was furious and at a loss to know what to do.   His youngest son, who they called Cinder Jack because he always sat with his feet in the ashes of the fire to keep them warm, spoke up saying,  “Father, my two brothers have tried and failed therefore trust me and I will not fail you and the vineyard will remain safe.”

This caused his father and two brothers to laugh and make fun of him because they thought him something of a simpleton.  Nevertheless, Cinder Jack was adamant and at last his father allowed him to guard the vineyard. So the next morning Cinder Jack went into the vineyard taking a cake with him for his lunch.

After spending all morning alertly patrolling the vineyard he grew hungry so he sat down took out the cake and began to eat.   As he ate the frog appeared and hopped up to him and sat staring at him with a questioning look on his face and then asked for a piece of the cake.  Cinder Jack immediately broke of a generous portion and gave it to the frog.

After they had finished eating the frog gratefully gave the boy three rods.  One was made copper, one of silver and the other of gold. The frog then told him that three horses would appear pretty soon and begin to trample the vineyard.  Like the rods the horses would be copper, gold and silver in color.  Then he told him that if he pointed the appropriately colored rods at the horses they would become as tame as can be and obey his commands.

Just as the frog foretold the horses arrived and began to trample over the grapes. Cinder Jack pointed the rods at them and told them to stop.  Just as the frog had said, they did and obeyed his every command.  That year the vineyard produced beautiful grapes that made the most wonderful wine. Cinder Jack never told his father nor his brothers what happened just resumed his usual position by the fire with his feet in the ashes keeping them warm.

The king of the land had a beautiful daughter and he decided it was time she was married.  To find what he thought of as a suitable husband he decided he would hold a competition with her as the prize.  He had his servants erect a tall fir pole before the church with a golden wreath of rosemary tied to the top.  Then he made proclamation saying that any man who could retrieve the rosemary from the top of the fir pole in one jump would win the hand of his daughter in marriage.

The news spread far and wide and all of the best and most noble knights of the land came to try their luck but all failed.  As the last one rode sadly away a knight suddenly appeared dressed in copper armor riding upon a copper horse with his visor covering his face.  Racing up to the fir pole spurred his horse into a jump and easily snatched the rosemary wreath from the top of the fir pole and rode off before anyone could move.

His two brothers had witnessed the scene and when they returned home they told their father about the mysterious copper knight and his massive jump.  Cinder Jack was sat with his feet in the ashes as usual and told them that he had seen the entire scene much better than they. When they asked him where he had been to see it all he told them, ’On top of the fence.”  Therefore the two brothers went and pulled down the fence to prevent their younger brother using it to see from again.

Once again all of the knights of the realm tried to pluck the apple and all failed.  As the last one failed there came riding a knight all in silver armor riding upon a silver horse who spurred it to a massive jump and plucked the golden apple from the top of the pole and rode away before anyone could approach him.

Again his brothers came home with the news of what they had seen.  Again, Cinder Jack told them he had witnessed the event much better than they by standing on the pig shed. This annoyed his brothers so they demolished it so that he would not be able to use it again for that purpose.

The third Sunday, the king ordered an even higher pole to be erected and this time one of his daughter’s silk handkerchief was placed at the top.   Once again all the knights in the land came and tried their luck and all failed and at the very last there came a knight clad in golden armor riding upon a golden horse.   The golden knight spurred his horse to a magnificent jump and took the handkerchief and rode off.

The following Sunday the King announced the knights who had taken the rosemary, the apple and the handkerchief should bring these prizes to him to prove their worth in a final competition. When none of those knights presented themselves the King ordered every man in his kingdom to appear before him but still he could not identify any of the winners.  As everyone was about to go home in the distance a knight riding a golden charger clad in a suit of armor of shining gold came galloping towards them. Seeing this the King ordered the cannons to be fired in his honor and the church bells to be rung.

The knight galloped up and seeing the princess by her father handed to her the rosemary wreath, the golden apple and the handkerchief.  Then he dismounted and politely and respectfully told the King he had come to claim his daughter’s hand in marriage.  Lifting his visor he revealed his face and the townsfolk were astonished to see it was none other than Cinder Jack.

The King kept his promise and Cinder Jack married his daughter.  All of his people loved and respected him and he had a long and happy reign. Now you would think that Cinder Jack would perhaps want revenge for his treatment by his brothers, but instead he rebuilt the house completely and gave them and his father riches and presents. He invited his father to live with him and his wife in their palace.  When the King died, because of his kind nature and generosity they made Cinder Jack their King.

It is said that the Hungarian name of Csaba, which means gift from the sky or gift from heaven, originated from a legendary warrior named Prince Csaba who according to legend was the savior of his people on a number of occasions.  There are many legends about Prince Csaba and many versions of the following legend which tells how he became to be seen as a gift from heaven for his people. 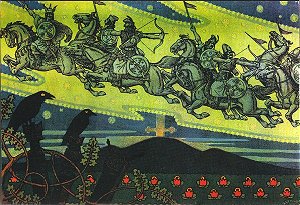 Csaba and his warriors – by Bertalan Székely – CC BY-SA 3.0

Who would rule the Hun kingdom?

When the Attila, the great leader of the Huns died an untimely death the tribes that made up the Hun nation found themselves at war with the Germanic tribes of the empire as fierce battles were fought to decide the future leadership of the empire.  Attila had many wives from many different tribes and races and he had fathered many sons.   Although everyone expected one of his sons to rule the question was which one?

After much conflict and the shedding of much blood two main contenders emerged:  Aladár, whose mother had been a princess from a powerful German tribe and Csaba whose mother was the daughter of the emperor of Greece.  Although when Attilla died he had been the solitary ruler of the Hun empire, he had previously ruled jointly with his brother until his death, though some say he had assassinated him.   However, now the empire was split in need of a strong leader.

The Germanic tribes of the empire sided with Aladár and the Huns sided with Attila’s youngest son, Csaba.  The two sides met in battle with Csaba winning the first battle.  Aladár managed to muster a great army and the two sides met again at what became known as the “Battle of Krimhilda”.  The fighting was bloody and desperate and was said to last for two weeks with many dead and wounded on both sides.  Eventually Csaba’s army was broken and scattered.  Csaba escaped with fifteen warriors and made his way to Greece where his mother had come from.  He then went on to Scythia where his father was born but vowed to return to his people one day in victory.

Three thousand Hun warriors survived and settled in a place called Csigle’s Meadow in what is now Transylvania.  These later became known as the Székely people and remained loyal to Csaba.  They kept to all the old Hun ways and they had a tradition which told that in their times of need Prince Csaba would return with an army to save them and according to their legends this has happened on several occasions.

After many years after the original Székely warriors had passed away their sons and daughters were once again threatened by invaders.  Like true warriors the Székely warriors met their enemies in battle.  Even though they were vastly outnumbered they fought through the day and into the night.  At last believing victory to be inevitable their enemies mocked them asking who would save them now that Prince Csaba was no more.  No sooner had the words come out of their mouths when glittering road of shining stars appeared across the night sky. Down from the heavens rode Prince Csaba at the head of a great army instantly attacking and routing them and once again becoming the savior of his people.

According to legend he returned at least three more times riding down the Skyway of Warriors to defeat the enemies of the Huns and save his people.  Another legend says that he returned again to lead Prince Árpád and the Hungarian tribes who were descendants and allies of the Huns over the  Carpathian Mountains into the land they would claim as their own and built into what is known as the country of Hungary today.  No wonder then that Prince Csaba’s name means gift from heaven.