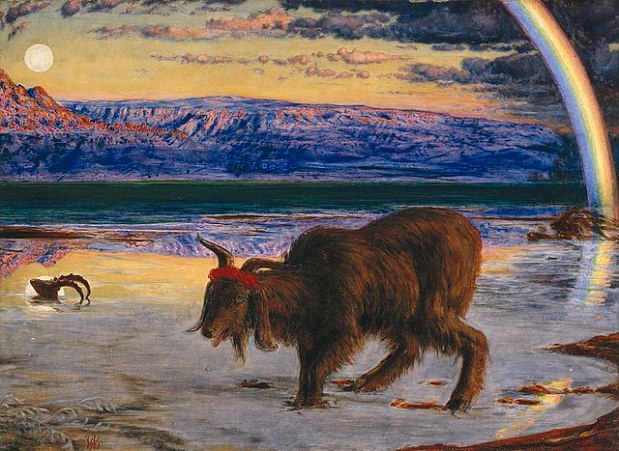 The History of Scapegoat

A scapegoat is a term that refers to someone who is wrongly or unfairly blamed for something that has happened   The term is believed to have originated with an ancient annual ritual that was enacted to remove the sin of a community each year. It is one of the oldest known rituals in the world and found in various forms in many different human societies around the world. Although many of these rituals did involve goats in come cases a human or some other substitute was used.  Presented here is a very brief discussion looking at the role and history of scapegoats in society. Not all aspects of scapegoating have been covered and what has been is only brief. I would urge people interested in the subject to do their own research and make up their own minds and my sources are provided below which can be used.

In these rituals a scapegoat could be a goat, a human volunteer or a person chosen unwillingly and had the sins of the people symbolically placed upon their head. They were then sent into the wilderness either to exist alone until they died or suffered some other form of exile or death.  The term became to be applied to someone who carried the blame for others and in doing so removed that blame from those others. It is also when a person or something becomes the object of unjustifiable hostility.

According to  the Book of Leviticus, from the Old Testament and the Torah, God ordained that all of the people of Israel would stop work and and the priest would enact rituals to nullify the sins of the nation.  One of these rituals involved the choosing of two goats and we are told,

“And Aaron shall cast lots upon the two goats; one lot for the Lord, and the other lot for the scapegoat. And Aaron shall bring the goat upon which the Lord’s lot fell, and offer him for a sin offering. But the goat, on which the lot fell to be the scapegoat, shall be presented alive before the Lord, to make an atonement with him, and to let him go for a scapegoat into the wilderness.”

In this way the lone goat that becomes the scapegoat and sent into the wilderness carrying with it the sins of the people and cleansing the nation for another year. Some scholars say a red cloth was wrapped around its horns symbolizing the sins it bore on behalf of the people.  In Judaism the ritual was carried out on the Day of Atonement or Yom Kippur.  However there are some scholars who disagree claiming the translation is wrong.  They say the goat was sacrificed by being thrown over a cliff outside Jerusalem and the ritual originated to pacify a fallen angel who had become a demon of the wilderness named Azazel.

In the modern world scapegoat theory refers to the habit of an individual or a group of people who blame someone else for their own problems.  It often results in covert or open hostility or prejudice towards a person or group of people who may be unfairly perceived as being to blame.  This individual or a group may stand out or apart from society for some reason, perhaps through race, religion, behaviour, philosophy, sexuality, gender or many other reasons.  Scapegoats tend to be blamed for the failings or misconduct of others who in turn believe that in laying blame on others they have exonerated or erased their own guilt. This raises  themselves to a higher moral level, while enhancing or maintaining a positive self-image for themselves. Psychologically although it enhances the accuser it destabilizes and denigrates the scapegoat.   Scapegoating in this way is also used in politics as a deliberate ploy to alienate a person or group of people for the political gain of another. The existence of an alien or misfit indicates the existence of a controlling conforming group that cannot tolerate deviance by an individual or small group of individuals.

Many people see the example of Jesus Christ who was scourged and carried the cross for his own crucifixion as a scapegoat carrying the sins of the community and through death cleansing that community.  Indeed Jesus does fit with the idea of a scapegoat in the  Roman and ruling Hebrew hierarchy as someone who stood out from the crowd, but Christians believe that when sinners own and confess their guilt and place their faith in Jesus they are forgiven their sins.

Similar forms of ritual scapegoating also existed in ancient Greece.  In Athens during the festival of Thargelia two ugly men were chosen for this role.  They were prepared a feast which they dined on and then taken through the streets where people beat them with branches.  They were then either driven out of the city by having stones thrown at them or escorted out though they were not killed.

The Maya of Central America also held an annual ceremony involving a scapegoat. At the end of each year, Mayan villagers made a clay model of the demon Uuayayah. They placed the model before an image of the deity responsible for governing the coming year. Then they carried the model of Uuayayah outside the village to stop evil entering their community.

An example of how a group can scapegoat an individual is found in the Book of Jonah, in the Hebrew Bible.  The story tells that while voyaging over the sea a massive storm threatened to sink the ship.  The ship’s crew somehow came to the conclusion that it was the fault of one man and that was Jonah.  Believing that to save themselves and the ship they would need to rid themselves of him they threw him into the sea hoping to appease the storm.   In the sea he was swallowed by a whale which spats him out alive after three days. The story is just one example of how the removal, sacrifice or death of an individual can be seen as the salvation of the community or in this case the crew.

However there are ways that some people such as politicians can benefit from becoming scapegoats.  They may be seen as martyrs suffering an injustice which in due course will win them sympathy and support from others such as an electorate.  Some people have made themselves famous, notorious and even rich from scapegoating and in some cases it can be an emotional strategy between two lovers and even children can often innocently use it to get their way.

The opposite of scapegoating would be to lionize individuals or laud an object, service or items of some kind.  In this way the chosen ones or objects become or appear to hold the answer to the people’s problems. The choosing of such a human does not necessarily have to be based on fact or truth it just has to be believed by the controlling group and acted upon as if it were true.  In this way it becomes possible for people with charisma and exceptional powers of persuasion to manipulate large groups of people for their own purposes for good or evil.

In conclusion, scapegoating can be used to impose the will of the controlling group of people onto a minority deviant section, transposing their own guilt, sin or culpability on to the smaller group and in doing so cleansing themselves.  Here we may think of modern politicians who know how to use scapegoating and its opposite for their own ends and enhancement.

Joseph of Arimathea holds a peculiar place in the mythology and traditions of England. He was a wealthy Jewish merchant from Judea who was also a contemporary follower of Jesus Christ.  As a member of the Jewish council, or Sanhedrin, he was a man of considerable influence in his  own country.  Joseph of Arimathea is so named because he came from Arimathea in Judea.  He was mentioned in all four gospels and from these we know he was a good and righteous man

Joseph  was believed to have converted thousands of people to the Christian faith, including Ethelbert, a local king of the time.  He was also said to have founded Glastonbury Abbey. At his death at the age of 86, it is said that he was so respected that six kings bore his coffin.   His life and actions in Britain remains enigmatic and whatever the truth is we will probably never know but Joseph of Arimathea remains an important figure in English and Christian tradition.  Read more …. END_OF_DOCUMENT_TOKEN_TO_BE_REPLACED