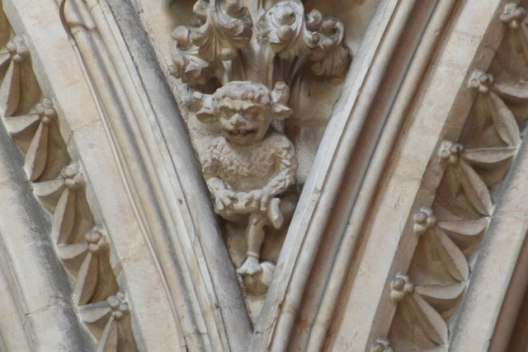 On the walls of Lincoln Cathedral in the city of Lincoln in England is a rather strange figure of an imp that is carved on the stonework of a pillar inside the cathedral.  Despite its strangeness, or perhaps because of it,  the imp has become a symbol of the city as well as a number of other local organizations.  There is a legend that tells that the grotesque was once a real imp that was turned to stone by an angel.

The Legend of the Lincoln Imp 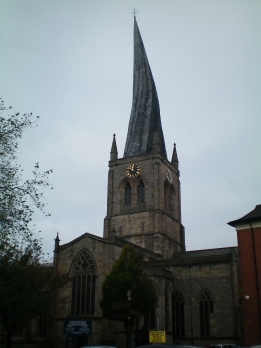 The legend is thought to date from the 13th or 14th century and tells how two imps were sent to Earth by Satan to cause as much mischief and mayhem as possible.   Arriving in the north of  England they set about their task with glee and malice causing mayhem and mischief everywhere they went.  Settling on the spire of St. Mary’s Church in Chesterfield they spitefully twisted it out of shape and even today the results of their mischief can still be seen. Today, the Crooked Spire is a well-known feature of Chesterfield, though there are other legends which give different accounts of how this came to be.

The imps were not satisfied with their handiwork and went on a spree of mayhem and mischief.  They soon caused chaos across the north and the imps decided to visit Lincoln. Coming across the cathedral they set about causing as much devilment as they could.  They broke chairs and tables and vandalized everything in sight and were even said to have tripped up the Bishop.   They caused so much damage that an angel was sent to deal with the imps and to put things right.

The legend says the angel appeared out of a hymn book as they were vandali\ing the Angel Choir and immediately ordered the two miscreants to stop.   One of the imps, terrified by the angel obeyed and hid under a broken table.  The other was bolder and more evil and as well as throwing stones at the angel threw insults as well.   The angel was taking no nonsense from the imp and promptly turned him to stone there and then.  As the other imp had obeyed him and had not thrown stones or insults the angel spared him the same fate as his friend and gave it a stern warning.  The imp did not need a second warning and quickly skedaddled.   There is a saying that when the wind blows around Lincoln Cathedral it is the imp flying around in circles looking for his friend who can be seen in the cathedral to this day, looking down from where he was petrified to stone by the angel.  Different parts of the UK have variations of this legend.

One variation of the legend is found in Grimsby and tells how the second imp, having escaped petrification by the angel in Lincoln Cathedral, made his way to Grimsby.  Imps being imps are born to make trouble this one soon began to cause mischief and mayhem around Grimsby.  Finding  St. James’ Church,  the imp went in and began a spree of vandalism inside causing great damage.  The angel who had exercised leniency at Lincoln was sent to deal with the imp and seeing it was the same one he had spared spared, this time gave it a good thrashing on its backside and then turned it to stone. Imps may be imps but they should not mess with angels!

The symbol appears to have been termed the “Lincoln Imp” because it is the best known example and seems to have the first come to popular usage in the 19th century, even though it is far older and many examples predate the 18th century.  It may that it came to the public attention more in the latter part of the 19th century when a businessman named James Ward Usher managed to get the sole rights to make jewelry using the symbol in his designs which helped to make him famous and wealthy.

The Imp as a Symbol 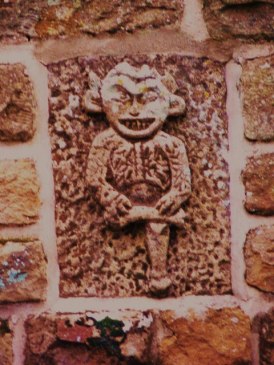 Modern example of the use of theLincoln Imp in the gable end of a garage in Farndale – Image by gordon clitheroe – CC BY-SA 2.0

The imp usually appears with cloven feet and with one leg raised to rest upon the other knee and both hands are gripping the leg that is on the knee.  It has a hairy body and open mouth displaying sharp teeth and has ears like those of a cow.

The imp is a symbol that appears in many parts of England and Scotland.  For example,   All Saints Church, Easington, Yorkshire has a carved stone figure of an imp.  The reason they were placed in churches or other places or their meaning is unknown.  It may be that these are not associated or representative of either the Lincoln or Grimsby imps but have some other purpose.  The use of the symbol is thought to predate both of these legends and many see its use as a similar mystery as that of the Green Man or the Three Hares symbol.

The Lincoln Imp is still a popular symbol and appears on the crest of Lincoln City Football Club and their mascot is known as Poacher the Imp.    A Gibraltar football club Lincoln Red Imps F.C., also takes their name from it and a World War 2, RAF  Squadron No. LXI Squadron RAF used the imp in its emblem until it was disbanded in 1958.  The Lincoln Imp is a symbol strongly associated with Lincoln and Lincolnshire and used by many local organizations and enterprises.  It appears in many works of art and jewelry still and is also found in churches and buildings in many other parts of England and Scotland. and many products of all kinds are found bearing its image.  Ultimately the legend of the Lincoln Imp portrays the imp as a symbol of the triumph of God over Satan and the never ending battle between good and evil reminding us that good will always triumph over evil.