The legend of the Christmas Rose tells the story of how a young shepherdess named Madelon, through her love and devotion, came to give the baby Jesus a gift more precious than gold, frankincense or myrrh. 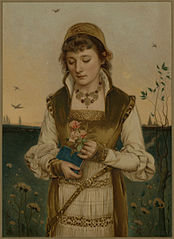 The Christmas rose (helleborus niger) is actually a perennial herb and grows in the cold, snowy mountains and high valleys across Europe. The flowers are white and star-shaped and tipped with pink. It is also known as the Snow Rose and the Winter Rose as it blossoms in the mid-winter season when most other vegetation lies dormant and covered by snow.

The tradition tells how the shepherds, while watching their flocks, were visited by an Angel who was leading the Magi to the birthplace of Jesus. The Angel told them of the birth of Jesus who would be known as the Prince of Peace, the King of Kings and the Saviour of their people. Overjoyed, the shepherds left their flocks to visit the new born king taking him such gifts as they could afford and were befitting of their status such as, honey, fruit and snow-white doves.

Now on that cold winter night when Jesus was born, the shepherds were not the only ones out on the hillside tending their flocks. A young shepherdess, called Madelon, was also out tending her family’s flock and had witnessed the arrival of the Angel and the Magi and heard what the Angel told the shepherds.

Hearing the news, the young girl’s heart became full of love and devotion and filled with faith. At a distance she followed the Angel, the Magi and the shepherds to the stable where Jesus lay in the manger, cared for by Mary and Joseph.

She watched as they entered the stable and the Magi laid their wonderful gifts of gold, myrrh and frankincense before the baby Jesus. She watched as the shepherds gave their gifts of honey, fruit and snow-white doves. Realizing she had nothing to give she rushed back to the hillside to try and find flowers that she could lay before him.

Finding none on the snow covered hillside she became full of shame and despair and began crying. As she cried her tears fell down her face onto the snowy ground around her. Seeing this from on high the Angel came down and touched the ground and a bush of the most beautiful winter roses sprang forth at her feet.

A Precious Gift Of Pure Blooms

The Angel told her, “No gold, no frankincense, no myrrh, is as precious, or as fitting a gift for the Prince of Peace as these pure blooms that are born from the pure tears of love, faith and devotion.”