The legendary adventures of Robin Hood and his Merry Men are among the best known and popular folk tales of the British Isles.  In different forms of adaption they have won worldwide fame and popularity.  As well as the swashbuckling action there is the popular appeal of a hero with the highest ideals and integrity who robs the rich to give to the poor. In earlier versions of the legend his status was that of a yeoman who had fallen foul of the law through injustice.  In this role as a working class hero he successfully cocks a snook at the law and authority, gaining much sympathy and support from the peasants and yeomanry who saw themselves as oppressed by an all powerful royal hierarchy.

In Robin’s day Sherwood was one of the Royal Forests and was subject to the Forest Laws.  These were designed to protect the game such as deer, boar, wolves or hares and game birds for the benefit of the king.

The penalty for breaking them was notoriously harsh. People living in or around a Royal Forest were subject to these laws and they were believed to be the cause of much resentment.  The forest and everything in it belonged to the king and he alone could give permission for its use.  This would only be given to his barons and noblemen on license and at a price.  Ordinary people could not hunt, clear or cultivate land within in its bounds.

Although not all of their former rights were taken they were much more restricted in what they could do.  Punishments for breaking the law included being blinded in both eyes or to have the hands cut off.  Not surprisingly, this would probably be a cause of massive resentment among the ordinary people who would have wanted to supplement their meagre livelihood from the free forest resources of meat, wood and land.

In Robin Hood the people found a hero who was one of their own and who successfully stood up against their oppressors.  Robin not only broke the law and got away with it he made the authorities look foolish.

In later versions he becomes a lord who had been dispossessed by the notoriously unjust King John for his support of King Richard who was away on the Crusades. This also had the appeal of the righteous lord who in loyally upholding the true monarch’s law in his absence is wronged by the usurper King John.

The Merry Men were his followers and fellow outlaws.  Their number varies from 20 to 140 over time. Any one who wanted to join had to fight Robin and beat him.   Most of what we know about them comes from the ballads about Robin Hood. The term ‘Merry Men’ is a generic term used to describe followers of leaders such as outlaws or knights.  ‘Merry Men’ were followers of any one who commanded a following.   Little John, Will Scarlet, Much the Miller’s Son, Alan-a-Dale and Friar Tuck are the most well known of Robin’s Merry Men.   Maid Marion was his famous love interest.

His arch rival was the Sherriff of Nottingham aided and abetted by Sir Guy of Gisbourne.    Under the cover of Sherwood Forest he and his Merry Men rang rings round these two as they tried their hardest to capture them.

The monarch of the time is generally considered to be King John while his brother, King Richard was absent at the Crusades.  In the ballad ‘A Gest of Robyn Hode,’ the king is named as ‘Edward.’   As the legend of Robin Hood seems to have grown over centuries it is difficult to be exact.  Who ever was the king they would have been expecting and pressing the Sheriff of Nottingham to capture and punish Robin Hood.

The Royal Forests were huge and not just areas of woodland, but included heath and scrub lands, often with human settlements within or around its boundaries.  Conversely, preserving these wild areas for game also provide perfect cover for outlaws to hideout in while living off the land by poaching the King’s deer and game.

Robbing the rich and giving it to the poor is one thing, but robbing the King’s deer would be unforgivable, especially if it was King John’s who was notorious for his tyranny and cruelty.   The Sheriff would have been under enormous royal pressure to capture Robin. The origin of the Robin Hood legends

Another source is the Percy Folio which is a collection of English ballads compiled by Thomas Percy in the 17th century.    Many of these ballads are believed to go back to the 12th century.  There are also many other later ballads that have Robin Hood as the central figure or mention him in some way.

Where was Robin based?

Where Robin Hood was based is a matter of contention. Sherwood Forest is the most cited place but there are other areas that also have a claim to be his territory.  Barnsdale in Yorkshire also has strong associations with him and many places in England have places names and public houses that bear his name as do Scotland and Wales.  It may be that he could have actually travelled to other districts as a fugitive to escape the clutches of the Sheriff of Nottingham and places he stayed at were named after him.

Was Robin Hood a real person?

The Roll of the Justices in Eyre, Berkshire record that in 1261 a gang of outlaws, including someone named as William, the son of Robert le Fevere was seized without warrant.  This cross references with another official document of 1262 records in the King’s Remembrancer’s Memoranda Roll of Easter that pardons the prior of Sandleford for the seizing of the chattels of a fugitive named William Robehod without a warrant.    William, the son of Robert le Fevere and William Robehod are widely thought to be the same person, though not necessarily the legendary Robin Hood, though many think it possible.  Some scholars think ‘Robin Hood’ may have been a generic nickname for medieval outlaws.

Robin Hood as a forest spirit

There is also the theory that Robin Hood was actually a part of a much older tradition.   Some theories associate him with mythological figures such as Robin Goodfellow.  In later times his character appeared in some May Day festivities the May King along side Maid Marion.  In folklore the May King was a male youth chosen for his physical perfection who would be given rights to impregnate the females of his choice in the community.  His reign lasted from one year or seven years after which he was ritually sacrificed in the belief that this would bring fertility to the people and their crops. 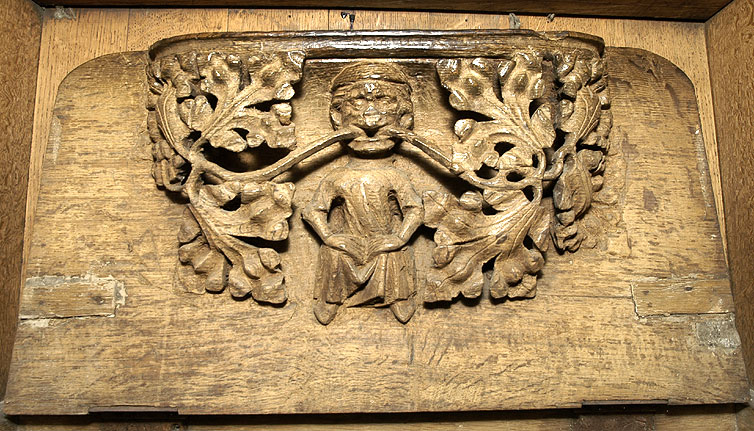 Robin Hood and the Green Man

He is also associated by some people with the ‘Green Man.’   The ‘Green Man’ is a term first used by Lady Raglan to describe an emblem carved in stone on the walls of her local church  Since then many other such Green Men have been found carved in the wood and stone of other old churches and ancient buildings.

No one is certain of its meaning but it is often found in churches in or around the edges of forests and woodlands. It is usually a face or head with leaves or branches sprouting from the mouth and entwining the head.   Many people think it was a pagan symbol representing a spirit of nature.  It is also thought to go back to Celtic times and may be a representation of the god Cernunnos.

There are a number of representations of the Green Man in the Chapter House of Southwell Minster which was built around 1100. and well within Robin’s Nottinghamshire territory.

The enduring appeal of Robin Hood

It is likely that unless other reliable evidence comes to light that Robin Hood will remain as elusive as was in medieval times.  Nevertheless his appeal and popularity are enduring and his legend continues to evolve into modern times.

Maybe we all need someone to stand against authority, steal from the rich and give to the poor.

Paradoxically, despite his outlawry he still maintains a reputation for purity of intent and honesty. He is seen as someone who is bold and courageous and a beacon of hope to the oppressed.  Some how, law breaking seems more forgivable if there is a noble and just cause behind it, carried out by someone with a pure and honest disposition.

The Enigma of the Green Man – Theories and Interpretations