Geoffrey of Monmouth and King Bladud

An extraordinary and very short account, of King Bladud, one of the early legendary Celtic kings of the Britons, is written in the Historia Regum Britanniae, by Geoffrey of Monmouth. This very briefly tells the story of a king who practiced necromancy and built himself a pair of wings in an attempt to fly.  Geoffrey says of him:-

Next succeeded Bladud, his son, and reigned twenty years. He builtn Kaerbadus, now Bath, and made hot baths in it for the benefit of the public, which he dedicated to the goddess Minerva; in whose temple he kept fires that never went out nor consumed to ashes, but as soon as they began to decay were turned into balls of stone. About this time the prophet Elias prayed that it might not rain upon earth; and it did not rain for three years and six months. This prince was a very ingenious man, and taught necromancy in his kingdom, nor did he leave off pursuing his magical operations, till he attempted to fly to the upper region of the air with wings which he had prepared, and fell upon the temple of Apollo, in the city of Trinovantum, where he was dashed to pieces. (1) (Chapter 10, page 28)

There is also a later legend about how he was cured of leprosy while working as a swineherd which also links him to the ancient founding of the city of Bath.

Descendant of Brutus of Troy

Bladud, or Blaiddyd, was a Celtic king of the Britons who was the son of  King Rud Hud Hudibras, and the tenth ruler from the line of the legendary Brutus of Troy, first King of Britain.  Bladud was supposed to have ruled for about twenty years somewhere between 863 and 500 BC.  Except for the accounts of Geoffrey there is little if any real evidence of either king’s actual existence and Geoffrey is not widely accepted as an accurate historical source by most historians.  Later writers further added to and embellished legends about him.  However, rather than an all powerful, warrior as many kings of the age were presented he is more the scholar, magician, or even the eccentric inventor, which was to lead to his final downfall.

The legend tells how Bladud in his youth was sent by his father to be educated in Athens.  On the death of his father he was said to have returned home bringing with him four philosophers and founding a university in what is now Stamford, Lincolnshire.   This university was alleged to have taught heresies and necromancy and was later closed by Saint Augustine of Canterbury.

When Bladud returned home from his studies in Athens it was found that he was suffering from a severe skin condition that was taken as leprosy.  Because of this he had to leave the Royal court and became an outcast.  He lost his status as heir to the throne and was forced to make his way in the world the best way he could.

The legend says that before he left the court his mother gave him a gold ring.  This was as a keepsake and also a means to identify himself should there become a need. Sadly, everywhere he went he was shunned and forced to move on as people did not want to risk catching his disease.  To support himself the took a job as a swineherd at a place about two miles from Bath known today as Swainswick.  With pigs as his only company he took to watching them closely and after a while  he noticed the pigs were also beginning to be afflicted by his skin condition.

Fearing the worst and to prevent his employer from finding out he drove the pigs across a river.  There he noticed the pigs were attracted to a boggy area of ground wallowing in mud which was warm because the area was fed by warm water springs.  According to the story when the pigs came out of bog he scraped them clean and discovered their skin condition was cured.

With nothing at all to lose Bladud decided to try the warm mud himself and bathed in it. To his great joy he found that this also cured his skin condition.  Bladud returned to court where he was identified by the gold ring his mother had given him.  He later became king and built a temple  and spa baths ingratitude on the site so that others may benefit from the mud. 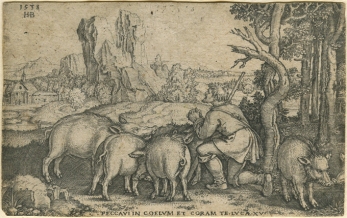 Another version tells how while tending the pigs he noted that during cold weather the pigs would go to a bog and come back covered in black mud which he discovered was warm.  From observing them he saw that they appeared to like the warmth. He also noticed that it appeared to work wonders for their skin as they suffered no blemishes or disease as pigs that did not use it suffered. With nothing much to lose he tried it for himself and found the warm mud cured his leprosy, or skin condition.  Returning to his home his father restored him to be his heir and he founded the spas at Bath to benefit others with skin conditions.

Bladud and the founding of Bath

According to legend Bladud was strongly linked to the founding of the spa town of Bath in Somerset.  The Romans developed the famous spa baths calling them Aquae Sulis, which means Waters of Sullis,  after thermal springs dedicated to the Celtic goddess, Sulis whom Romans identified with Minerva.  In later times as it grew it became known as Bath.

There is a legend that it was Bladud who founded the city and created the the thermal springs the city is famous for by magic. Geoffrey says that undying fires were lit whose flames transformed into balls of stone as they died with new flames springing from them to take their place (2).  This may have been a description of how coal was used as a source of fuel for the flames in the temple altars.

According to legend Bladud practiced and encouraged necromancy and trying to communicate with the dead.  From this came the inspiration to built a pair of wings for himself.  He tried them out but collided with the temple of Apollo in Trinovantum, now known as London and reputedly founded by his ancestor Brutus of Troy.  He fell to earth and was killed. The legend tells he was buried in Trinovantum and succeeded by his son Leir, who William Shakespeare wrote his famous play about. 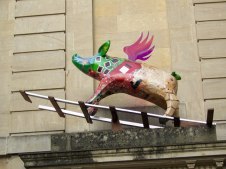 In more modern times the people of Bath have celebrated their legendary founder in a brilliantly creative way.  In 2008, a public art event called King Bladud’s Pigs in Bath celebrated the legendary origins of Bath.  More than one hundred beautifully decorated pig sculptures were displayed throughout the summer around the Bath area.  Later they were auctioned off to contribute funds towards the city’s Two Tunnels Project, which seems like something the eccentric king would approve!