On the remote Pacific island of Rapa Nui, or Easter Island, an annual competition was held to determine who would be the Tangata manu or Bird-man for the next year.  The Tangata manu was an important post which held valuable privileges for the holder who was also given a special status.  The competition was centered around the Specatacled and  Sooty terns known as the  manutara.  These two species of seabirds nested on the nearby islet of Motu Nui between July and August each year.  Participants competed to collect the first egg laid by the Sooty tern and bring it back to the sacred village of Orongo. There the winner would become the Tangata manu for a term.  Presented here is a brief discussion about Rapanui culture, followed by a brief explanation of the competition and the cult of the Birdman and concluding with the cult’s demise.

Rapa Nui is a place of mystery whose people developed a unique culture and civilization. The most visible and famous product of this culture today is the moai.  These are giant stone statues in humanoid form positioned at different sites around the island.   The chief god of the islanders was Make-Make and they were known to perform ancestor worship and the moai were believed to be an integral part of this.

The people of the island are known as the Rapanui and must have spent a great deal of time and effort creating the moai.  Yet, for some reason they abandoned the statues and took up a new form of worship centred on the Tangata manu and the cult of the Birdman which seems to have replaced the cult of the moai. The Birdman cult was believed to have existed during the time of the moai building though it seemed to have had less significance.

Nobody knows why this radical change occurred but it is a huge step for any society to suddenly abandon long held beliefs and replace them with new ones. Whether some kind of revolution against the ruling order occurred or the Birdman was some kind of new messiah cult is not known but the Rapanui still retained their belief in Make-Make as their chief god. There does appear to be an oral tradition and some archaeological  evidence about an internecine war that ravaged the island but whether this was over dwindling resources or a power struggle between two cults or something else is unknown.  Perhaps the cult of the Birdman was brought in as a peaceful way to decide who would have control of the valuable Sooty tern eggs. 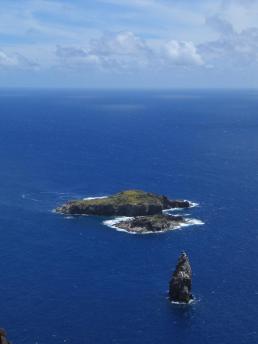 The Birdman competition appears to be a peaceful way of settling who should have the rights to the annual harvest of sea bird’s eggs and who would be the Tangata-Manu or Birdman during the year.  The annual arrival of the Sooty terns that nested and brought up their young on the islet of Motu Nui just off Rapa Nui was a major event and a valuable resource for the islanders.

It was the shamans of the clans, known as ivi-attuas, who competed by nominating one or two of the young men in the clan to compete for him who were known as hopu. These nominees would previously have been revealed to the ivi-attua in dreams.  They would be the representatives of their clan in the competition and their challenge was to be the first to bring back the first egg of the Sooty tern from the islet of Motu Nui where they laid their eggs and brought up their young each year.

The competition begins from the sacred village of Orongo, perched on the cliff tops looking over the sea to Motu Nui. The hopu must complete a difficult climb down to the sea and then swim across hazardous waters braving sharks to reach Moto Nui.  They then have to climb the cliffs of the islet to find the first egg.  Then they have to return keeping the egg unbroken by swimming back across the sea and climbing back up the cliffs to Orongo to the waiting ivi-attuas.  It was an incredibly difficult and dangerous task and sometimes hopu were killed in the attempt.

Who ever found the first egg was entitled to rest on Motu Nui until they had recuperated physically and were of the right frame of mind spiritually. They then had to climb down the cliffs to the sea.  Swim back to the cliffs of Orongo then climb up the cliffs to the sacred village with the egg unbroken.   The other competitors would then return to their respective patrons with the news.  The winning ivi-attua would have his head shaved and painted white, or red.

When he arrived at this residence he would then become tapu or sacred during the following five months of his 12 month term.  He would grow his fingernails and during this period, wear a special headdress made of human hair and be given a new name.  Presents of food and tributes were given and he was given special privileges. Importantly his clan was given the sole rights to harvest the eggs and Sooty terns of Moto Nui during his period of residence as tapu.  The rest of his period as tapu would be spent in solitude in a special house.

Decline of the cult

During the 1860s Catholic missionaries arrived from Europe and the cult was discouraged and consequently declined.  Most of the people were captured by slave traders and sold off  to the highest bidder.  Those that escaped and remained were wiped out by smallpox and other diseases the Europeans brought with them.   The Rapanui lost many of their leaders and wise men in this way and most of their knowledge and history died along with them.  The old religions were replaced by Christianity and the missionaries taught the survivors the European view of the world for good or bad.

Today, despite its isolation Rapa Nui and its citizens are still a major fascination for many people who still wonder at the remarkable people who produced such a rich culture and is still special today!

The Moai of Rapa Nui – the spirit of the people

Rapa Nui is an island of mystery and lost secrets. It is most famous for the giant stone statues called moai that stand in silent sentinel over the island and its people.

Rapa Nui, is also known as Easter Island and is one of the world’s most mysterious places. The Rapanui created a civilization on one of the remotest places on earth, a tiny speck of an island that lies in the vast emptiness of the South Pacific Ocean.

The island is roughly triangular shaped and is situated 2,300 miles to the west of the South American coast and is southeast of Tahiti 2,500 miles away with the nearest place of human habitation being Pitcairn Island which is 1,260 miles distant.

Rapa Nui is under the auspices of Chile who in 1935 made the island a national park. In 1996 UNESCO made it a World heritage Site.

How the original settlers found their way to the island and why they came is shrouded in mystery.    The people are believed to be descended from Polynesians who had great physical endurance, and remarkable seamanship and navigational abilities.   They colonized many isolated and distant south Pacific islands using nothing more than ocean going canoes to voyage across vast stretches of empty ocean.

Although the exact date is not known it is believed that a group of around fifty Polynesians led by a king called Hotu Matu’a arrived on the Rapa Nui in a double-hulled canoe between 600 AD and 800 AD.  Some experts give earlier dates while others say later and the debate still continues.