The Cherokee have many wonderful stories that explain aspects of their life and nature and help them to make sense of their place in the world.  In 1902, James Mooney, an ethnographer, published Myths of the Cherokee which presented a collection of myths, legend, traditions and customs of the Cherokee people.  In many of their legends and folktales there is no formal ending or conclusion as such which leaves it open for future generations to add their part in creating a living story.  A modified version of the Origin of Strawberries is presented here based on Mooney’s work and influenced by others. 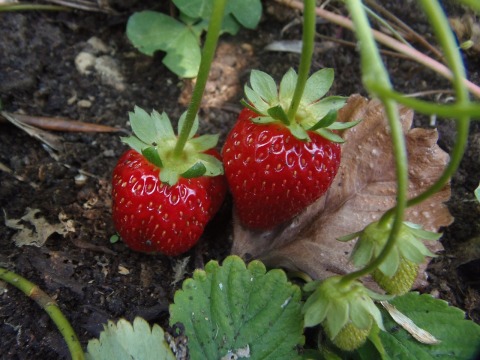 The legend of the origin of strawberries

The legend of the origin of strawberries begins in the early days when the world  was still young and the story was just beginning with the first man and the first woman who lived together as husband and wife.  For a long time they were very happy with each other but there came a time when things were not as good and they began to argue.

After many arguments the woman finally decided she would take no more.  Leaving her husband behind she set off east in the direction of the Sun land that is called Nûñdâgûñ′yĭ.  Her husband was sorry they had argued and followed at a distance grieving for her.  The wife never once looked around but continued walking towards the Sun land in the east.

The man was distraught and prayed that she may come back to him and continued following her.    Une′ʻlănûñ′hĭ looked down and saw the man following his wife and grieving and understood what had happened.  Une′ʻlănûñ′hĭ felt sorry for the man and asked him why if he still felt anger towards his wife.  The man said he now felt no anger towards her but missed her company badly.  Une′ʻlănûñ′hĭ asked the man if he would take her back as his wife again.  The man readily and eagerly told him that he would.

Une′ʻlănûñ′hĭ looked down and seeing the woman was heading towards the east caused a bush of the juiciest huckleberries to spring from the ground right in her path.  The woman took no notice of them and passed round them continuing to walk into the east.

Une′ʻlănûñ′hĭ was surprised and decided to try again.  Next he caused a bush of fine blackberries to grow right on the path she was taking to the Sun-land, thinking they would surely be too tempting for her not to stop and eat her fill.  Again she simply walked around the blackberry bushes ignoring them completely and continuing walking into the east.

Une′ʻlănûñ′hĭ was perplexed and tried to tempt her with other fruits but she simply took no notice of them and continued walking into the east.  He then caused trees with branches laden with red service berries to grow in her path thinking this would surely tempt her to stop. The woman simply paid no attention to them and continued walking into the east.  At the end of his tether Une′ʻlănûñ′hĭ created the most luscious fruit of the most gorgeous color of red to grow right in her path.  These  berries had never before been seen on earth and the woman seeing them was intrigued by the vibrancy their colour and scent.

She bent down and picked one and put it into her mouth.  The taste was delicious and she had never tasted anything so good in her life.  As she ate she looked towards the west where she knew her husband was and she remembered his face.   She remembered all the good times they had together and she no longer wanted to go to the Sun-land and sat down thinking she would wait for him to catch up.

The longer she waited the stronger grew her desire to see him.  Filling her hands with the biggest and juiciest strawberries she walked back the way she had come into the west. When she met her husband who was still following he was delighted to see her and she was delighted to see him.  Together they walked back to their home in the west sharing the strawberries she had picked together.  From the first man and the first woman came more people who spread out across the land like the strawberry plants and so the living story grew and multiplied and continues to unfold.