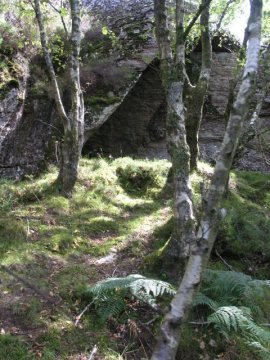 Twm Siôn Cati was a real person who entered Welsh folklore for his exploits as an outlaw, thief and a confidence trickster.  There are many stories about him but it is generally agreed he was born around 1530 in the Tregaron area of Wales. His mother was Cati Jones of Tregaron and his father was said to be  Siôn ap Dafydd ap Madog ap Hywel Moetheu.  His mother named him Thomas Jones and he became became popularly known as Twm Siôn Cati.

Twm had hideout known as Sion Cati’s Cave on Dinas Hill above Tregaron. The cave is quite difficult to access requiring a steep climb and is hidden by rocks and trees and overlooks where the River Pysgotwr joins the River Towy.  Many tall stories grew up around him and it is difficult to separate fact from fiction as there are many versions of the same tale.  The following are examples of these tales.

Twm and the highwayman

In one such story Twm is carry a large wad of money gained from his illegal activities and needs to stay overnight in an inn.  It may be that thieves have a way of recognising another thief,  but Twm gets wind of a plot by a highwayman to steal his ill gotten gains.   The next morning Twm prepares his horse making a show of fastening his saddle pack as if it contains something valuable and then rides off.  He has not gone far when he notices the highwayman is shadowing him.  While not letting on he knows the highwayman is there he throws the saddle pack into a nearby pond and then rides off.

The highwayman waits till Twm has disappeared into the distance and then dismounts and wades into the water to find the saddle pack which has sunk to the bottom.  Meanwhile Twm has doubled back and while his adversary is searching the pond Twm steals his horse and rides off with it.  Now the highwayman has trained his horse well and he shouts at it to stop.  After a few apt expletives Twm finds the right words which  set the horse galloping away again and escapes selling the horse for more profit.

Twm and the farmer

Another tale tells how an angry farmer hunted after Twm after he had stolen one of his cows.  The farmer on arriving outside the home of Twm’s mother sees a beggar outside the house and asks him if Twm Siôn Cati lived there.  The beggar tells the farmer that indeed he does live there.  The farmer then asks the beggar to hold his whip and horse while he goes into the house to confront Twm.

The farmer storms into the house looking for Twm but the beggar is really Twm and gallops off full pelt on the  horse straight to the farmer’s house.  Once there he jumps from the horse and rushes to find the farmer’s wife.  He finds her and tells her that the husband is in deep trouble and is in desperate need of money.  To convince her he presents her husband’s horse whip and horse as proof.  Convinced, she gives him the money but instead of taking it to the farmer he rides off to London and sells the horse when he gets there.

Twm and the shopkeeper

On another occasion Twm enrolled the help of a beggar to steal a pot from a shop.  After entering the shop separately Twm began talking to the shopkeeper, saying his pots were not very good, while the beggar looked around as if interested in buying something.  Twm further distracted the shopkeeper by telling him one of the pot had an hole in.  This annoyed the shopkeeper who took great pride in the quality of his wares and began to examine one closely.  Twm told him to put his hand in the pot, which he did and then Twm pointed out that there must be a hole for him to get his hand inside.  Meanwhile with the shopkeeper distracted his accomplice has sneaked off taking the best pot in the place with him.

Twm and the squire’s daughter

Another tale tells how Twm robbed a young woman who was accompanied by her father, a local squire.  According to this, Twm fell in love with the woman at first sight and gave her the jewellery back.  He tried his best to win her affections by conventional means but he was unsuccessful.

However, not being one to give up easily he came up with a more unconventional way. One night when there was a full moon he crept up to her bedroom window, tapped lightly on the pane and when she opened it he grasped her hand tightly.  Kissing it  passionately he refused to let go until she had agreed to be his wife.  Defiantly, the woman refused to accept the proposal. Twm drew his knife and cut her wrist slightly causing it to bleed.  He then told her that unless she promised to marry him he would cut her hand off.

Hardly a romantic moment but she agreed to the marriage, which despite her father’s opposition took place soon after.  Now, some say the woman had been married before to the Sheriff of Carmarthen who had died leaving her a widow.   The Sheriff was said by some to have been Twm’s arch enemy.  Nevertheless, whatever the truth in this, they married.

Ironically, it seems that with marriage he eventually gained enough respectability to become a justice of the peace, judging others until his death in 1620.  At some stage he appears to have been given a Royal Pardon by Elizabeth Ist and apart from his outlaw days is remembered as a justice of the peace, bard, Welsh historian, genealogist and a pillar of respectability.