On the borders of the English counties of Warwickshire and Oxfordshire, not far from the village of Long Compton, lies a mysterious complex of Neolithic and Bronze Age megaliths known as the Rollright Stones. Presented here is a brief description of the stone complex followed by a look at the petrification myth associated with it that fancifully attempts to explain its origin.  The presentation concludes by briefly mentioning other stone circles and monoliths that also have petrification myths associated with them.

The Rollright Stones complex consists of three sets of monuments; the King Stone, the Whispering Knights and the King’s Men.  The King Stone is a single standing stone set some 50 yards outside the stone ring which is  separated from it by a road.  The Whispering Knights was a burial chamber also outside the stone ring.  The final set is a circle of stones called the King’s Men.

The sets are not the same age as each other and all appear to have had different purposes. This leads scholars to think that the site had a strong tradition of ritual over a long period of time and had some kind of special significance during that time.  With the timescale involved and the sheer mystery of their purpose perhaps it’s not surprising that a number of intriguing myths and legends have evolved as people throughout the ages attempted to explain their existence.

The Petrified King and his knights 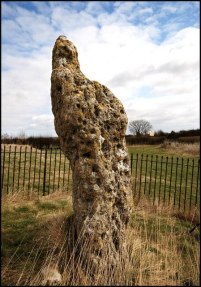 The King Stone – Photo by Cameraman

According to a legend recorded by William Camden in 1610, and put into verse, there was a king who wanted to conquer the entire country of  England and he came across a witch who confronted him saying,

“Seven long strides shalt thou take And if Long Compton thou canst see, King of England thou shalt be.”

The King took up the challenge saying in reply,

“Stick, stock, stone As King of England I shall be known.”

And strode forward, but on his seventh stride a long mound, which sometimes now is known as the Arch-Druid’s barrow rose up before him preventing the sight of Long Compton.  The laughing witch cried,

The King was turned into a standing stone known as the King Stone and most of his men who were gathered in a circle were turned into the King’s Men ring of stones.  Outside of this circle was a small group of knights who some say were in prayers, while others say they were whispering  and plotting against the king.  Either way they still fell victim and were turned to stone to become Whispering Knights.

A legend says that one day the spell will be broken and the King and his knights will resume their conquest of England unless they have the bad luck to come across another witch. It is not told if the king had angered the witch in some way.  Neither is it known why the witch turned herself into an elder tree  unless it was to keep an eye on the hapless king.  The witch’s tree is said to be growing in a hedge separating the King Stone from the Stone Circle and according to legend will bleed if it is cut when in flower.  It is said that on Midsummer’s Eve people would congregate around the King Stone and he would move his head when the elder tree was cut.

Midnight at the stones

Tradition says the King’s Men are released from the petrification spell and return to life at midnight.  They all join hands together and dance in a circle and are also said to go down to the spring in a nearby spinney  to take a drink. This is a dangerous time because it is said that anyone who should witness these extraordinary events will die or go mad.

Many other stone circles and standing stones have petrification myths attached to them that tell how people were turned to stone by a witch, God, or the Devil for taking part in some forbidden activity in some way.  Some people think these type of legends were encouraged by the Christian church who were keen to discourage pagan practices. Another school of thought was that such legends were promoted by the Puritans as a warning to keep on the straight and narrow path of the Christian faith.

The threat of petrification may have been seen as a lasting and very visible punishment for transgressing the rules, especially those of merrymaking on Sundays which seems to be a popular day for being turned to stone in Britain!  In the case of the Rollright Stones we are not told what the day was only that it was a witch that gave the king the warning and appears to have foretold the king’s destiny, or cast the spell that fulfilled it.

Was it misfortune, or just a bad day?

The petrification of humans into stone is often associated with the creation of stone circles and standing stones.  Many other ancient stone circles and monoliths also have petrification myths attached to them such as Long Meg and her Daughters in Cumbria, Mitchell’s Fold in Shropshire, the Stanton Drew stone circles of Somerset, the Merry Maidens and The Hurlers,  Cornwall and there are plenty of other examples in the British Isles and around the world.  In Britain the petrification is often caused by a witch, or for participating in some forbidden activity such as merrymaking on a Sunday.  In the case of the Rollright Stones the King and his men just seemed to have had the misfortune to happen upon a particularly spiteful witch, or just caught her on a bad day!