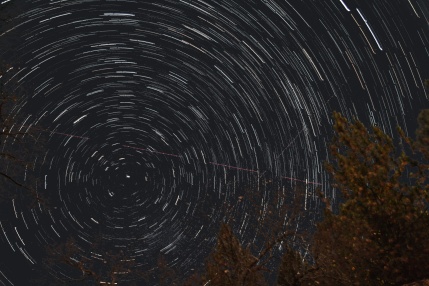 The Paiute people of North America are spread over a wide territory ranging across Arizona, Nevada, California, Utah, Idaho and Oregon. They are an ancient nomadic people who made a living from hunting and gathering and some basic farming.  The Paiutes were made up of two or three main groups which were split into a number of tribes and bands that lived scattered across their territory.  Their spiritual beliefs reflected their closeness to the natural world and they created many myths and legends which attempted to explain the world they lived in.  The following is a rewrite of a legend that tells how the North Star was created and how it helped the Paiutes and other earth-dwellers find their way in the dark.

The Legend of the North Star

Many, many, years ago when the world was still in its youth the People of the Sky were restless and wandered through the heavens leaving their trails behind them.  Today, people on Earth can see the ways they went by watching the trails they left which show in the night sky.  Of all the millions and millions of stars we see in the night sky the only star that does not appear to journey across the night sky is the North Star.

However, the North Star does move.  It moves in a small circle around the north celestial pole each day but from earth, it looks stationary.  Unlike the sun, moon, and stars it does not rise or set.  It appears like the hub of a wheel to stay still in a constant position in the sky and in the northern hemisphere is used as a guide to find north.  However, according to Paiute tradition back in the time of the earth’s youth there was not a  North Star.