Cantre’r Gwaelod was a legendary land situated in Cardigan Bay, Wales, that became flooded by the sea drowning many of its inhabitants and forcing survivors to seek new homes further inland.  There are many different legends which give an account of how this deluge happened and this work looks at the one which casts the blame on a maiden named Mereid, who was responsible for maintaining a sacred well which fed the spirit of a goddess into the land.

Few people survived the catastrophe that Mereid had let loose.  Seithennin was drowned along with most other inhabitants of the land.  Her father, Gwyddno and his sons survived and a few other people  made it to high ground.  Their descendants scratched out a living among the rugged hills and valleys further inland to the new shoreline. Today, sometimes remnants of the fair land of Cantre’r Gwaelod are sometimes seen at low tides such as the submerged forest near Ynyslas, near Borth, invoking distant memories of a lost land taken by the sea.  Read more END_OF_DOCUMENT_TOKEN_TO_BE_REPLACED 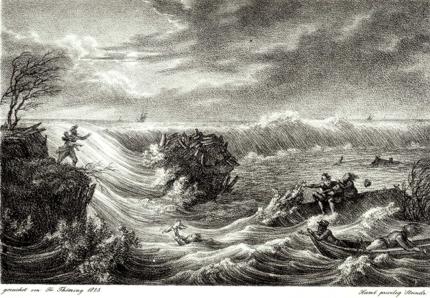 The ruler of the land was Gwyddno Garahir. In Welsh legend there are many rulers named Gwyddno but this one was said to be the sire of Elffin ap Gwyddno, who was the foster father of Taliesin the legendary Welsh bard.  Gwyddno Garahir, or Gwyddno Long-Shanks in English, was also reputed to be the keeper of one of the Thirteen Treasures of Island Britain which was said to be a magic basket which caused any food placed in it to multiply one hundred times. His main fortress was Caer Wyddno or Fort of Gwyddno and said to be situated to the northwest of the modern seaside town of Aberystwyth. According to this version around 600 AD a great storm blew out of the south west one night forcing the tide against the sea walls of the dyke.  Read more END_OF_DOCUMENT_TOKEN_TO_BE_REPLACED Like other Welsh deluge legends such as Tyno Helig and Cantre’r Gwaelod there is the legendary submerged town of old Bala unLder the waters. This legend differs because Lake Tegid is a freshwater inland lake while the kingdoms of Tyno Helig and Cantre’r Gwaelod were located under what is now sea. Nevertheless, all three were the victims of a catastrophic deluge and they do have some common factors. This work will focus on Lake Bala. and discuss the two different legends which tell how the old Bala town was flooded and the lake was created.  Read more END_OF_DOCUMENT_TOKEN_TO_BE_REPLACED